For most of us, we know what needs to be done to reach the next level. If you want to improve health and fitness, we don’t need another fad diet… we need to exercise more and eat healthier food. If you want to close more deals, you probably need to make more cold calls. If you want to ace the big exam, studying more is a pretty clear path.

Indeed, the problem most of us face isn’t figuring out what to do; it’s actually doing it.

Starting at a new effort can feel overwhelming and discouraging. That first gym workout is awful before, during, and especially after. Penning the first few pages of that novel you’ve always wanted to write is going to be arduous and difficult.

Here’s the good news — the first few reps of any new skill, project, or discipline are the hardest… by far. The first time you’ve jogged a mile in 20 years is far more challenging than running 10 miles after training for a few months. The first few times you get on a stage to present are a hundred times scarier than speaking in front of 1,000 people once you’ve had some experience and practice. 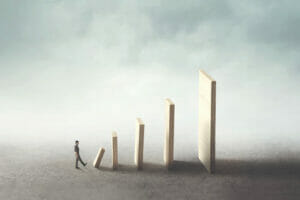 The beauty of progress is that the difficulty curve geometrically decreases with persistence. In other words, you not only get better with practice, but it also becomes easier. If doing a particular thing feels too tough, realize that you only need to endure through the first few attempts.

‘Easier over time’ is a liberating mantra. It means that even the most intimidating challenges can be conquered if we can manage to suffer through the first early steps. The willpower needed to accomplish greatly isn’t that of superheroes. We mere mortals can do incredible things if we can just tough it out in the early days of a new pursuit.

When you’re deep in a challenge, facing the inevitable struggle and wanting to give up, just remember that your next attempt (and the one after that) will eventually become easier.

What new skill, project, or habit have you put off because it just felt too difficult? Give it a fresh look — with the ‘easier over time’ lens — to boost your confidence, resolve, and, ultimately, results.